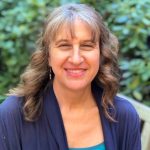 It’s Corporate Media, ‘Moderate’ Democrats, and the Oligarchy vs. Bernie Sanders and a Movement

Endorsement: Why Millennials Believe Bernie Can Provide Us All With A Better Future

Annis Pratt is an environmental activist and nature writer living in the Detroit area. She has is a columnist for the international online magazine Impakter.com, where her latest article is on Climate Grief. She has also published an Eco-Fiction series, Infinite Games, about marshland dwellers struggling to protect their homeland against merchant adventurers and land developers (www.annispratt.com).
No Comment