On October 9, Dr. Jim Gude, the Intensive Care Director and a driving force behind the Sonoma West Medical Center’s (SWMC) reopening, was awoken at 1:30 in the morning by an emergency phone call. It was SWMC nurse Val Takes, who had been driving on US 101 passing the Sutter Santa Rosa Medical Center when she saw a huge fire heading from the east toward the Sutter Hospital.  “She warned me what was coming,” Gude recalls.  “I arose, dressed and drove to the Sonoma West Hospital to prepare.”

Every one of them volunteered to come to SWMC in the middle of the night to accept patients transferred from the Sutter Medical Center and elsewhere.

“We set up a Triage System and early that morning admitted 16 patients from the Sutter Santa Rosa ICU and Ward,” Gude recalls. “We ended up Monday evening with a total of 30 patients.”

During the week that followed the tragic fire, two of Santa Rosa’s three hospitals: Sutter and Kaiser, were forced to close, leaving Memorial Hospital’s emergency room overloaded (Sutter, as of press time, has reopened and Kaiser’s hospital and ER remain closed due to smoke from the fire).

The Sonoma West Hospital, whose emergency room had a record 54 admissions and re-admissions last Monday, has only 37 beds, less than half the number as Sutter and one-third the number as Kaiser. But it picked up the slack. Some SWMC rooms were doubled up and a few overfill patients even had to be temporarily treated in hallways, a first for the small community hospital.

The Sonoma West Medical Center, which rose like a phoenix from the closed Palm Drive Hospital,  remains the only community hospital in the United States to close and then manage to reopen. Federal, state and private health insurance providers make it nearly impossible for local hospitals to avoid losses, forcing citizens in non-urban communities into the more cost-efficient, impersonal care of large corporatized urban hospital centers.   It has taken many millions of dollars, enormous risks, and a continual challenge to the area’s political establishment for SWMC to remain open. It has also taken the dedication and hard work of its medical staff and its dogged supporters, who have argued, all along, that the growing and aging and population of West Sonoma County should not be forced to lose a hospital and an emergency room that has saved lives in the area for more than 70 years. Ever since the unpopular decision to close Palm Drive Hospital was first announced in April, 2014,  hospital advocates have asked what would happen if  there was an earthquake or a fire?   Santa Rosa’s three hospitals, nearly ten miles east of SWMC, are all close to a major earthquake fault line, and unlike SWMC  are all the type of multi-story buildings  are often forced to close in earthquakes.

Last week demonstrated SWMC’s importance to the Sonoma County community. Open hospital advocates are hoping that local, state and federal elected representatives, including  West County Supervisor Lynda Hopkins, as well as public health officials, will take note of this and provide the support for keeping the hospital open that they have been unwilling to provide in the past.

Dr Gary J. Mishkin, a doctor who works at both SWMC and Memorial, lost his home in last week’s devastating fire. This did not stop him from working long hours in the emergency room, where he was interviewed last Thursday by the Sonoma Independent (see video below). “Small community hospitals,” Mishkin explained, “have been taken for granted for a long time. There’s been a lot of emphasis on big facilities Kaiser, Sutter, and Memorial. Well look what happens when those facilities are compromised. If it was not for Sonoma Valley, this hospital, and Healdsburg hospital, what would have happened?  Our small community hospitals are the backbone. They are the foundation really of our medical network, and the tertiary facilities like Memorial—they are the university-like facilities for us to refer our most complicate patients to.”

“But this is a perfect example,” Dr. Mishkin said,  “of why the community needs a balance of the high quality university-level facilities and the smaller community hospitals.  This is the exact reason why.”

The Sonoma West Medical Center, which reopened two years ago, has since seen thousands of patients and maintained the same level of safe, personal care that allowed Palm Drive Hospital to be ranked, in early 2014, the number one safest hospital, by patient outcomes, of 360 hospitals in the entire State of California.

Dr. Richard Powers, a popular local doctor, was elected last year in a heated contest over whether the hospital would remain supported by the District Board that was created for the purpose of funding a hospital with an emergency room, or forced to sell its building and be shut down to pay off bankruptcy creditors, a position that District Board member Jim Horn has long advocated.

“People need this place when other hospitals are impacted or even closed,” Dr. Powers told the Sonoma Independent (see video interview below).  “Basically it’s a community effort, everybody doing their best to take care of what’s needed. We’ve had family doctors who normally did hospital work in the past but for the last year or two have let the hospitals do it came and took up their role again to take care of the influx of patients. We really had a lot of good help from community doctors. So we’re gladly doing that and we all still have the same caring spirit that was traditional with this hospital.”

Patrick Lee, an Emergency Technician at SWMC, observed that last week, “Every was putting in overtime and long shifts but were grateful to do it. We were stressed out but we were all there to do a job.”

“Without this hospital,” Lee observed, “where would those patients have gone? I find it hard to believe that anyone would want to close it down after this. Without a doubt, we were really needed.” 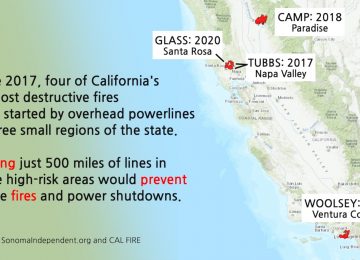