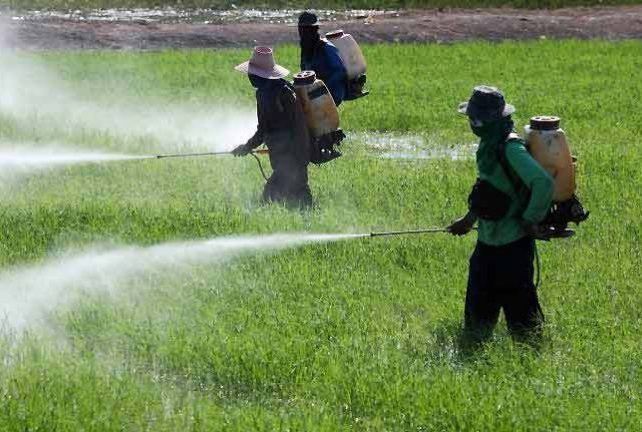 The most heavily used chemical weed killer in human history has been declared carcinogenic by a team of health experts testifying last week in San Francisco’s U.S. District Court. While government agencies have declared Roundup safe, based on corrupt science and flawed analysis (often drawing from Monsanto-funded studies), a lawsuit on behalf of farm workers has put Monsanto’s Roundup on trial for causing non-Hodgkin lymphoma (NHL), an often deadly form of cancer.

Ever since the chemical was labeled a probable human carcinogen by the World Health Organization’s cancer experts (International Agency for Research on Cancer) in 2015, the agro-chemical industry, led by Monsanto, mounted a furious backlash.

They launched the industry funded Campaign for Accuracy in Public Health Research(CAPHR) with the express purpose of attacking the the World Health Organization’s well-regarded cancer research agency.  CAPHR’s website claims that the organization “promotes reform of the International Agency for Research on Cancer’s Monographs Program and brings to light the deficiencies, misinformation, and consequences associated with its work.”

From the testimony of a series of independent experts at last week’s trail, it turns out the IARC was right to link Roundup with cancer. Expert after expert testified in San Francisco that glyphosate causes the form of cancer known as non-Hodgkin lymphoma.

Full transcripts of the trial testimony are available to the public, courtesy of the US Right to Know organization, from the bottom of this web page.   March 5 opened with the testimony of Dr. Beate Ritz,  currently Professor and Vice Chair of the Epidemiology Department at UCLA’s School of Public Health.  Ritz  has published more than 260 peer-reviewed papers, and has conducted large pesticide studies in California’s Central Valley.

The Court asked Ritz: “Your opinion is that non-Hodgkin’s lymphoma can and is being caused by glyphosate-based formulations. Correct?”

Dr. Ritz: “As long as there are farmers who have been using it in the way that we have studied it, definitely.”

From analyzing a number of relevant studies, Ritz concluded: “occasional use might be okay, but don’t use this routinely. Your risk (for cancer) increases more than twofold if you’re a routine (glyphosate) user.”

Addressing an ongoing North American Pooled Project (NAPP) research study, Ritz noted: “It is a powerful pooled study; meaning they got all of the data together to do these analyses. And why it’s powerful, is that they were not only able to assess NHL as one big category. They were able to now also look at certain subtypes of lymphoma. And they’re showing that basically all of these have an increased risk due to glyphosate.”

In defending Roundup, critics of the IARC’s conclusion that glyphosate causes cancer, have cited the 2017 Agricultural Health Study published in the Journal of the National Cancer Institute. That study concluded there is “no significant relationship between glyphosate use and any cancer.”

Dr. Ritz and other experts during last week’s historic hearing challenged that conclusion by pointing out major errors in this U.S. government funded  study. One of the most obvious errors they cited was that conclusions were drawn after 37% of those studied had dropped out. And application over time relied on memory which led to exposure miscalculation.

Ritz explained, “You’re challenging people to do a lot of complex archaeology of their exposure history on the spot, when they’re there to get their pesticide applicator license. And glyphosate at the time was not sold to them as a highly toxic pesticide.”

Ritz also revealed that a federally funded critical review of the Agricultural Health Study by the Harvard Risk Assessment Group found glaring problems. “Misclassification reduces the power of the study to detect any genuine cause/effect relationship, and will also reduce the validity of the findings.”

“I just cannot take this study serious, in terms of the science that it produced, if it shows no effect, because all of the affects are drowned out in the noise of exposure assessment – exposure misclassification,” Ritz concluded.

Dr. Ritz also shone a light on study bias due to conflict of interest. “You can see patterns in publications. We have some colleagues who, no matter what paper they write, they never find any affects. While a lot of other colleagues may be publishing papers that actually see something.”

“After reviewing all of the scientific literature at hand, I really concluded that, to a reasonable scientific degree of certainty, glyphosate and glyphosate-based compounds, including Roundup, do indeed cause NHL.”

The Court: Is it your opinion that in the exposures some people are getting right now — farmers — glyphosate is causing — has caused or is causing non-Hodgkin’s lymphoma for them?

Dr. Ritz: If the dose is high enough, yes.

The Court: Is it your opinion that some of these studies that we have discussed — McDuffie, De Roos 2003, Eriksson — show that glyphosate has caused non-Hodgkin’s lymphoma in people?

The plaintiff’s attorneys also called on Dr. Dennis Dean Weisenburger, chair and professor of the City of Hope’s Department of Pathology, a specialist in cancer of the immune system, who has published over 400 papers on non-Hodgkin’s lymphoma and the related disorders in peer-reviewed journals.

The Court: This opinion you have that glyphosate and GBFs (glyphosate based formulations) can cause NHL in humans exposed to these chemicals in the workplace or environment, is it your opinion that it’s capable of causing NHL in humans at the exposure levels they are current — some people at least are currently experiencing?

Dr. Weisenburger: Yes. I believe that, yes. The body of evidence is strong evidence, that led to my conclusions and my opinion.

Dr. Weisenburger’s testimony included: “There have been studies of farmers, and about 60 percent of farmers had glyphosate in their urine on the day of application.”

“I reviewed all of the published literature on the animal studies, including the IARC the EPA, the German review, and actually even some of the published animal studies. It was my conclusion that there were multiple positive carcinogenesis tests in both mice and rats, and we see dose-related effects for multiple tumors. In four studies in the mice, you saw malignant lymphomas, these are NHLs, in the mice. So the chemicals were inducing the NHLs in the mice.”

Data from the ongoing North American Pooled Project shows: “The risk for NHL increased almost twofold when you looked at greater than two days per year (of exposure). There is good data to conclude that exposure to glyphosate increases the risk for non-Hodgkin’s lymphoma.

About the Agricultural Health Study – “It’s an important study, but with regard to glyphosate, there are significant issues and flaws that resulted in a negative finding.”

He cited two alarming South American studies that showed DNA damage from glyphosate exposure. “The first one by Paz-y-Miño looked at DNA damage in blood leukocytes in Ecuadorian people who were exposed to the spraying of glyphosate-containing chemicals. They lived on the border of Ecuador and Colombia, and Colombia was spraying all of this glyphosate to get rid of the cocaine and other illicit crops, and these individuals were living on the border and were getting exposed to the chemicals, just as by drift, or actually being sprayed. This happened over a period of weeks.”

“And so after that period of time, the researchers went in and drew blood from people who were exposed, who lived on that in that area, and a group of people who were very similar, but who lived far away and weren’t exposed. When people are sprayed with glyphosate at pretty high doses, they actually get measurable DNA damage.”

“The second study was a study actually done in Colombia, looking at glyphosate sprayed from airplanes onto crops. Spraying of the glyphosate increased the DNA damage in that very short period of time.”

And finally, testimony from Dr Chadi  Nabhan, a hematology specialist (specializing in lymphoma), a former Associate Professor of Medicine in Hematology-Oncology  University of Chicago.

Q: Have people, in your opinion, knowing what you know now, gotten non-Hodgkin’s lymphoma in real world exposures from exposure to glyphosate-based products?

A: In my opinion, absolutely, yes. I’m suggesting is that there’s a subset of patients with non-Hodgkin’s lymphoma that have developed the disease because of this exposure.

In his testimony Dr. Nabhan defended the IARC’s findings about glyphosate. “I looked at the IARC very thoroughly, and I firmly believe in the conclusions of the IARC. The IARC has assessed over 1,000 compounds so far. You have to prove that there is enough human exposure to get the IARC’s interest, and there’s enough animal data and some studies to support that it’s worth the time for the IARC to actually even look at these compounds. So from 1,003 compounds, only 120 were labeled as carcinogenic, 12 percent, and only 8 percent, 81, are probably carcinogenic.

In conclusion he stated: I think there’s enough evidence to suggest that the exposure to glyphosate has clinical significance in terms of causing and contributing to non-Hodgkin’s lymphoma.”

The US Court, Northern District of California has posted video footage of the full March 5-9 “Science Week” Daubert Hearings in the Roundup products liability litigation against Monsanto Company.

Closing arguments are set for tomorrow (March 14) when U.S. District Court Judge Vince Chhabria will then decide whether there is evidence to support the plaintiffs’ claim.

Will Monsanto’s lawyers and industry aligned experts prevail in defending Roundup, or will the court allow Roundup to be put on public trial?

The global glyphosate market is expected to exceed $10 billion by 2022.

Inequality, Boom and Bust: From Billionaire Capitalism to Equality and Full Unemployment

Jon Woodhouse is the Managing Editor of The Maui Independent. He writes weekly for The Maui News and has worked for the Department of Education since 2001.
One Comment