The story, published in May, 2015, was titled, “Despite Record Budget Surplus, Supervisors Refuse to Restore Library Hours,”  and won First Place for the “Columns-News/Political” category.  It was written by this reporter and accompanied by a petition on the Sonoma Independent’s unique “WHAT YOU CAN DO” toolbar that was signed by 1,300 people.

As a result of the public awareness and public pressure raised by this column,  and a follow up column debunking excuses that some County Supervisors gave for not funding the restoration of library hours, the Supervisors broke from protocol during their annual budget review and expressed support for a possible funding solution in the future (as documented here).

The 2015 Sonoma Independent award winning story noted that despite a record projected  budget surplus of $13m million, and an enormous $28 million four year increase in spending on prison and probation, the Supervisors refused to use the surplus funds to assist the library.   “While many other County funding cutbacks that impact far fewer than 100,000 library users have been restored” the article noted, “inflation adjusted funding for libraries has actually fallen by 3% since the unprecedented hour cutback in 2011.  County Library Director Brett Lear believes it would cost just $1.2 million to restore Monday hours.”

The Sonoma Independent,also won a third place award for its July, 2015  “Infographic illustrating water usage”  for an article by this reporter titled,  State Parks Agency Uses Drought As Excuse to Cut Beach Showers That Benefited Millions.

The graphic, below, was created by Sonoma Independent designer Sammy Vanek, a Santa Rosa native and graduate of UC Santa Cruz. 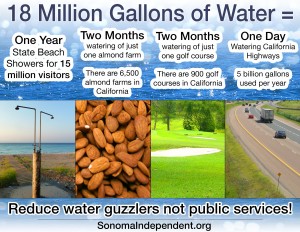 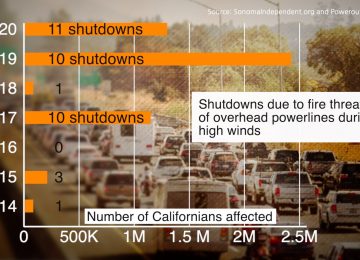