On October 5, the San Francisco Press Club announced its winners for the 2021 Greater Bay Journalism Awards for work published in NorCal media during the 2020 calendar year. The SonomaIndependent.org, won five awards in the contest’s non-daily news media sector. This is the sixth straight year that the Sonoma Independent has won awards in the contest since the website was founded, in 2015, to provide public interest-focused transparency, solutions and advocacy for Sonoma County, California, and the nation.

This year Sonoma Independent editor Jonathan Greenberg won a first place award in the Columns-Features category for his extensive commentary, “Endorsement: Why Boomers Owe it to the Young to Vote for Bernie Sanders.” Greenberg also received a first place in the Newspapers- Non-daily: News Story category for his piece “‘Vote In Person’ Was Biden’s Most Important Debate Message,” an article that followed the presidential debate at a time when then-President Trump was repeating the erroneous claim that mail-in voting would lead to widespread fraud.

In addition to the first place awards, Sonoma Independent writers received second and third place in a number of categories. This reporter Tim Ryan received second place in the Columns: Features category for his endorsement, “Why Millennials Believe Bernie Can Provide Us All With A Better Future.” This endorsement was published in a series with Greenberg’s Bernie Sanders endorsement. Together the two endorsements were shared thousands of times during the 2020 Democratic primary and viewed by tens of thousands of readers nationally.

The Sonoma Independent also won second place for Best Headline category for Greenberg’s column, “#Dumbkirk and the Benefits of Ridiculing Trumpsters.” The feature explored the public’s reaction to the Trump Boat Parade at Lake Travis, Texas, where a number of boats overladen with Trump supporters and offensive decorations sank or required rescue. 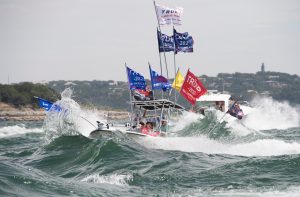 In the News/Political category Greenberg also received a third place award for his endorsement “Vote YES on Prop 15 to End Obscene Tax Breaks for Real Estate Billionaires.” This article advocated for a California initiative that if passed would have closed the tax loopholes associated with Prop 13. The law, which was billed as protection for elderly homeowners, has long been abused by billionaire and corporate owners of vast commercial real estate empires.

In 2019 the Sonoma Independent won two first place awards. First place for the Digital Media: Feature Story/Serious Nature category (for work that appeared in 2018) went to Sonoma Independent’s editor Jonathan Greenberg’s for his article, “What Trump’s John Baron Deception Says About our Truth-less President.” The same article also won first place for best headline. It described insights offered by the nation’s leading pundits to Greenberg’s Washington Post story, which had made headline news internationally, and detailed how, in 1984, Trump impersonated a fictitious “VP of finance” John Baron to con then Forbes reporter Greenberg into putting Trump on the Forbes 400 rich list.

In addition to describing pundits ‘reactions to the coverage, Greenberg brought together fellow journalist’s insights into what this “origin story” can tell us about President Trump’s current behavior. A wide range of commentators discussed the story, from late night talk show hosts like Trever Noah, Seth Myers and Stephen Colbert, to reporters from Salon, the New Yorker, and Forbes. The Sonoma Independent also won first place for the best headline, for the title to that same story, “What Trump’s John Baron Deception Says About our Truth-less President.”

In 2018, the Sonoma Independent won two Greater Bay Journalism 2018 Awards, including second place for a photo essay of a Stop Hate peace rally in San Francisco titled,“!U HATE ME I LOVE YOU/S.F. Stands Up to Hate.”

In 2017, the Sonoma Independent also won multiple awards, including one for Jonathan Greenberg’s first place in the political columnist category for his controversial July 24, 2016 column,  “In Bypassing Warren As VP, Clinton Raises Risk Of Losing To Trump.” The column, which also appeared as a post on Greenberg’s Huffington Post political blog, was published on the eve of the Democratic National Convention. It warned that “Bernie Sanders’ young and independent supporters are the last voters in the world who should be taken for granted.”

It predicted, correctly, that “If a significant percentage of Bernie-backing voters reject a Clinton-Kaine ticket by not showing up to vote, or by voting for other candidates, then Hillary would lose in November. Donald Trump would become the next President of the United States of America.  That would be a tragedy of historic proportions. A tragedy, in part, of Hillary Clinton’s making.” 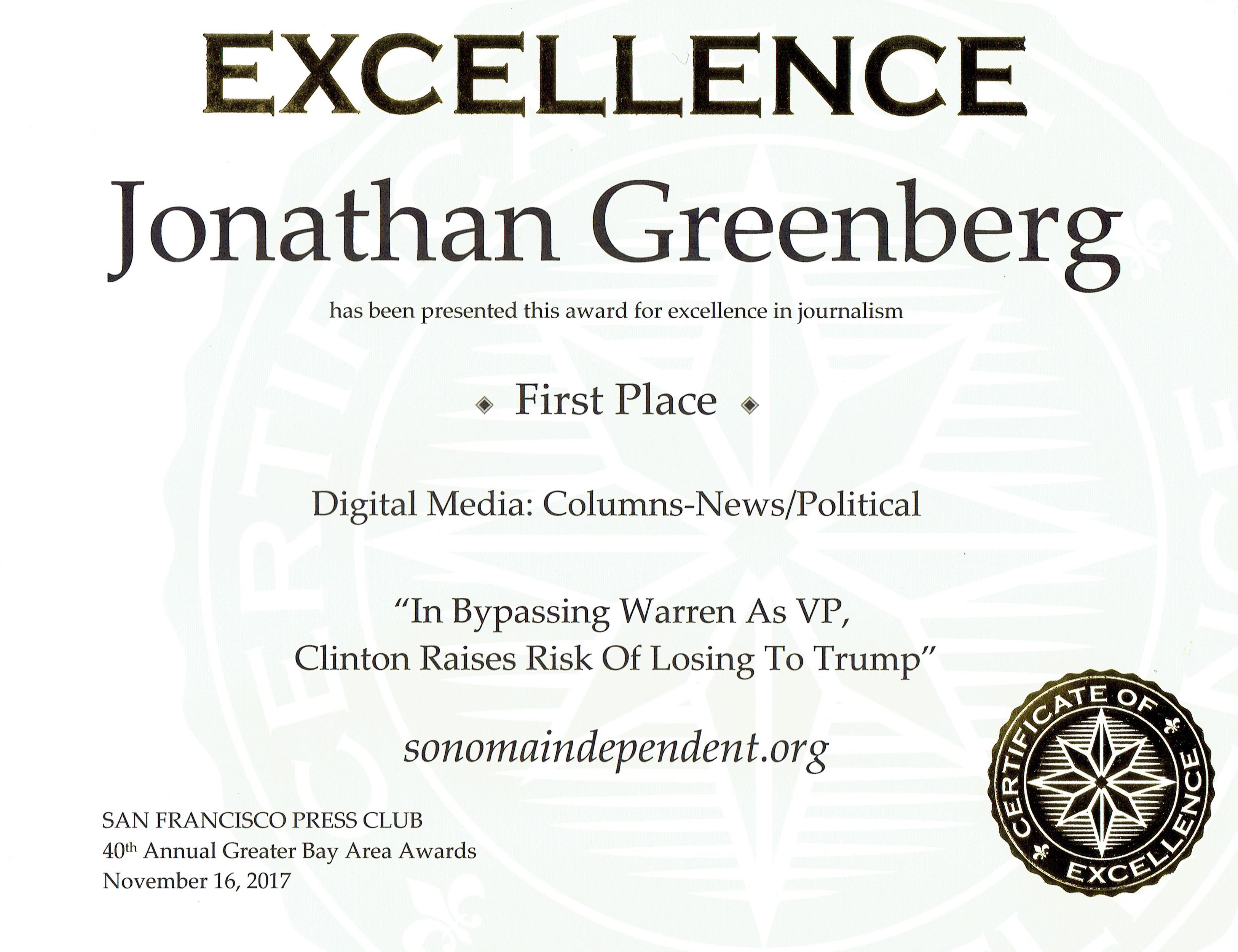 The Sonoma Independent also won three second place awards. One was for Digital Media Overall Excellence. Another was also in the Columns-News/Political category for “Five 2016 Election Victories that Prove Sonoma County is ALREADY Great!” The column noted that  local citizens rejected the national conservative trend by voting in the first women majority of Sonoma County’s Board of Supervisors in history, as well as a GMO farm moratorium, a tax to restore library hours after six years of Monday closings, a Palm Drive Hospital Board majority committed to keeping West County’s hospital open and a county-wide 70 to 23% electoral landslide for Hillary Clinton.

Jonathan Greenberg also won a second place award for the 2016 eulogy feature, “What I Learned from My Wise Uncle Leonard Cohen,”

In 2015, its very first year of operation, the Sonoma Independent won two awards from the San Francisco Press Club. A column by Greenberg titled, “Despite Record Budget Surplus, Supervisors Refuse to Restore Library Hours,” won the first place award in the Columns-News/Political digital category. This story was accompanied by a MoveOn civic engagement petition signed by nearly 1,300 citizens. The story and petition were part of Greenberg’s “Restore Library Hours Campaign,” which ultimately succeeded, after a 2018 ballot initiative, in raising sufficient funds to reopen 100 county libraries on Mondays and evenings.

The Sonoma Independent’s mission is to serve the public interest by providing readers with insight, transparency, solutions and advocacy.