Is the Tide Turning on Sonoma County’s Secret War on Weed?
Jonathan Greenberg May 5, 2015 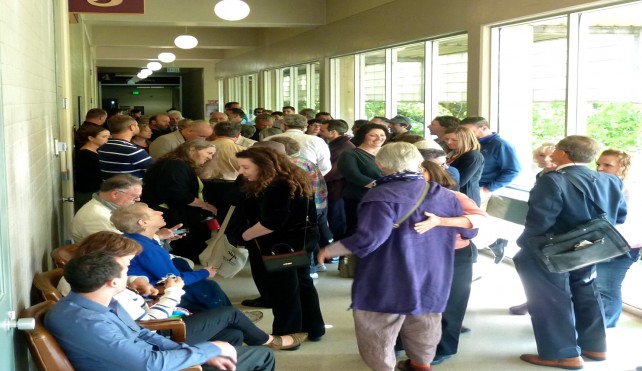 The overfilled Santa Rosa courtroom of Judge Rene Chouteau was standing room only, as nearly 100 supporters of Yarrow Kubrin turned out for the sentencing of a local real estate broker and father of two small children.

Dozens of supporters waited in the hallway to hear the final sentencing, which was one year in county prison, followed by four years “supervised release” (probation).

After the sentencing, Kubrin attorney Chris Andrian explained that this would likely mean about six months in local jail. “It was a fair and just decision,” Andrian said. “The judge took into consideration the good and the bad.”

Andrian had asked for probation only, with no jail time, so that Kubrin could remain with his wife, seven-year-old daughter, and emotionally challenged four-year-old son.

As described in detail here at the Sonoma Independent, the County’s $63 million per year Probation Dept. had requested a four and a half year prison sentence. And on behalf of ‘The People Vs. Yarrow Lee Kubrin,” Sonoma County District Attorney Jill Ravitch’s office ignored more than 1,000 signatures on a “Stop Incarcerating Parents for Victimless Marijuana Crimes” petition urging her to lessen its request for five and a half years of jail time.

Sonoma County’s District Attorney Jill Ravitch,  whose $225,000 annual salary and $109,000 in benefits makes her the seventh highest paid D.A. of 58 California counties, refused to answer written questions provided a week in advance from the Sonoma Independent about the purpose of spending millions of public dollars to jail otherwise law abiding citizens for victimless marijuana-related crimes.  But within hours of the sentencing, she was quoted in a Press Democrat article here calling the Kubrin prosecution a “public safety” case involving cash and guns. She said,  “This has nothing to do with whether it should be legalized…It has to do with efforts to keep our community safe now.”

Unfortunately for the taxpaying public, Press Democrat court reporter Paul Payne did not bother with what seems like two logical follow up questions for Sonoma County’s District Attorney:  What did Kubrin do that had any impact on public safety, and which specific members of the public were victimized, or harmed, by his actions?

The Sonoma Independent contacted  District Attorney Ravitch after the sentencing and asked these very questions, but again,  received no response. Instead, Ravitch provided a comment to San Francisco’s Bay City News here, which apparently was more willing to present her quote without any counter-arguments.  Ravitch stated, “When people take advantage of the medical marijuana laws in order to line their own pockets under a veil of legitimacy, they will be prosecuted. And when convicted felons arm themselves with assault rifles, broker hundreds of thousands of dollars worth of marijuana illegally, and launder their proceeds to hide them, they will be held accountable. Our community deserves to be protected from this highly profitable and potentially lethal combination.”

It seemed to many in the courtroom that Kubrin’s wife Heather, who said that she kept the never-fired guns as collectibles, showed more care for her family’s safety in keeping them locked in a safe in a locked basement room than many gun owners demonstrate.  And despite a reported 40 charges against him for technical violations of California’s arcane medical marijuana laws,  there were no charges that Yarrow Kubrin ever robbed or threatened anyone, or diverted water, farmed on public land, or sold to minors, or sold marijuana publicly. The accusation of money laundering seems particularly ironic, since it was Kubrin’s attempt to deposit the proceeds of his marijuana collective’s sales in the Exchange Bank that led to the police bust of his non-profit business.

So on one hand, marijuana growers are either not legally allowed to deposit money in banks, or, if they do, this will trigger their incarceration (as it did in Kurbin’s case). On the other hand, the District Attorney’s office argues this cash creates a dangerous situation that endangers public safety. And, unlike many other cash businesses run by law abiding citizens, because marijuana is involved, anyone engaged in the marijuana business is ineligible for the protection that the Constitutional right to gun ownership provides other Americans.

In the courtroom, such inconvenient facts were ignored as Deputy District Attorney Anne Masterson delivered an impassioned sentencing argument for five and a half years imprisonment. The Sonoma Independent would have liked to present a video of the statements made at today’s sentencing, but a formal application to bring a video camera to record the Superior Court proceedings and present them to the public was rejected, without any explanation,  by Judge Chouteau late last week.

So despite a state law permitting cameras into the courtroom, the Sonoma county citizens whose taxes pay Anne Masterson and Jill Ravitch’s ample salaries will be unable to witness how the public servants employed by our District Attorney’s office vilify a defendant when justifying their secret war on victimless marijuana crimes. Masterson portrayed Yarrow Kubrin as a child-endangering parent who left marijuana on the kitchen counter near food (without mentioning that his two year old was not in the house the early morning of the bust). Like Ravitch, she called him a repeat felon (not mentioning that his past arrests were for small sales of marijuana at the age of 19). She warned that Kubrin possessed deadly firearms  (not mentioning that they were owned by his wife, never fired, or brandished, and were well-secured in two locked safes).

Prosecutor Masterson then alleged, without any evidence or justification, that a small, never fired .22 caliber gun found locked in a secure gun safe in the basement was “apparently for use by their two year old daughter.”

‘This is not a man who is a legitimate businessman,” Masterson told the court. “This is not a marijuana case.  This is a cash and guns case… that calls out for a prison term. Kubrin has made a lifelong commitment to making money in the marijuana business, and he did it very well.”

After observing Matherson’s arguments, a local Kubrin supporter named Ruben observed to The Sonoma Independent, “She was out for him, she was out for blood.”

In a long, detailed, and personal speech, Kubrin attorney Chris Andrian rejected Matherson’s charge that Kubrin was dangerous. He noted that Kubrin has never been charged with a single act of violence, and that he did everything he could to make his business legal, registering his non-profit marijuana collective, getting permits for it and opening the bank accounts whose cash deposits triggered his arrests. Andrian called Kubrin a peaceful, family man who, like many other “good solid citizens” in the real estate and construction business, turned to marijuana growing to support their families in the aftermath of the 2008 recession. Andrian acknowledged the more than 1,000 petition signers who joined him in requesting no jail time, and to the widespread public attention being placed on the sentencing due to Kubrin’s network of community supporters, the Sonoma Independent coverage, and a version of  this coverage (by this author) in the Huffington Post.

“Marijuana,” Andrian told the court, “is now California’s largest crop, worth $14 billion a year. It has become an essential part of the Northern California economy, and we all benefit from it. The people of this state are likely to legalize it in 2016. Marijuana is part of our culture and it’s not going away. We have to learn how to do this differently. Rather that treat these as criminal cases, we should treat them as businesses and tax them.”

Superior Court Judge Rene Chouteau, piercingly attentive during Masterson and Andrian’s long speeches, spoke softly, but firmly, for just a few minutes. “Probation is not appropriate in this case,” he said. He scolded Kubrin’s recidivism, noting “Your father has been writing letters for you since 1992.” Judge Chouteau expressed alarm about the half dozen guns found in the safe, saying, “You acquired a large number of guns designed to kill your fellow human beings. When you have these weapons, you are putting your family and neighbors at risk.”

Then, without ever mentioning the word marijuana, Judge Chouteau announced his sentence of one year, rejecting the D.A.’s request for a five and a half year prison term.

He next reviewed the probation report, announcing fees and mandatory drug testing that will include marijuana. He dismissed the Probation Department’s recommendation that Kubrin be sent back to prison to serve his full five year term if he ever tested positive for alcohol during his four year probation period, and also removed the written request by the Probation Department that he be sent back to prison for setting foot in a place that served alcohol.

The sentencing complete,  Yarrow Kubrin kissed his wife goodbye.  Three armed court officers placed him in handcuffs and led him out of the courtroom to the Sonoma County jail.

Afterward, the hallway filled up with supporters listening to Andrian explain the sentence. He then thanked those who turned out for Kubrin.  “You guys did more than I did,” he said.

The morning after the sentencing, I interviewed Heather Kubrin nearby the school where she was dropping off her second grade daughter (as disclosed in last week’s coverage, our children attend the same school).  She is planning to get a real estate license to help support her family, since Yarrow has now lost his.  She said that she told their children that daddy would be home by Hanukah or Christmas.  A six month term, she explained, will be challenging, but manageable.

Heather Kubrin appeared rested, resigned, and relieved that the judge did not comply with the District Attorney’s request for a five and a half year sentence, which would have meant nearly three years in jail.  “That would have been devastating,” she observed. “It would have caused a lifelong change for our children, especially our four year old son, who has special needs.  Our pediatrician wrote a letter describing why he really needs to be with his father at this time.”

Apparently, Judge Chouteau understood this, and heard the record number of letters and petition signers supporting leniency for  Kubrin.  I asked Heather why, then, did the District Attorney insist upon such a long sentence.   “They don’t care what your family situation is,” she said. “I know that there are many, many children of other people incarcerated for long periods for victimless crimes, but the prosecutors just don’t care.”

Jonathan Greenberg is Editor of the award-winning, privately owned public interest website The Sonoma Independent, which he founded in 2015 with the mission of informing to empower. Jonathan is an investigative financial journalist with 40 years of experience with national publications. During the past few years, Jonathan wrote three of the most widely-read exposes about Trump’s career published in the Washington Post. Jonathan was the notorious Forbes 400 reporter who taped two long Trump calls in 1984 in which he pretended to be the fictitious John Baron. His Post expose about this, with audio here, has been the subject of monologues on Colbert, the Daily Show and Seth Meyer’s A Closer Look. Jonathan has appeared live on a dozen top news shows, including Chris Cuomo’s CNN Good Day and most recently on CNN’s prime time Upfront with Erin Burnett to expose Trump’s latest lies. a fuller bio and links to Jonathan's work can be found at JonathanGreenberg.com.
5 Comments on this post.